Check out the Trailer!

Now it is started!

Tanzmanege is filling Gorbitz with dance, circus, music and street art, taking the kids from the Hort Tintenklecks on a creative, cooperative and playfull journey.

Welcome to the performance Friday the 28th and Saturday 29th of August at 14.00.

The performance will take you through the area of Gorbitz, starting at Hort Tintenklecks, Amalie-Dietrich-Platz 10.

You will see Gorbitz like you never seen it before, through the creativity and playfulness of the children! It will be a short journey filled with colour, dance, circus, musik and street art.

After the performance there will be chance to see pictures from the project, talk to the pedagogues, try out some circus and dance and eat a fruit or a piece of cake.

It’s all for free. See you there!

Are you a participant of the project, press here 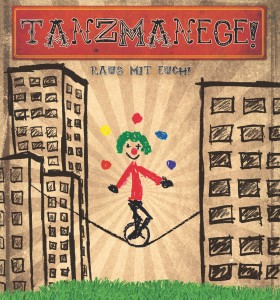 Tanzmanege! is a dance and circus project supported by the German Bundesministerium für Bildung und Forschung, through the support plattform ChangeTanz  that lies within the initiative Kultur macht Stark. The project is a cooperation between the Jugendkunstschule Dresden, Tanznetz Dresdens Projektschmiede and the Hort Tintenklecks in Gorbitz.

The project is a continuation of “Tanzmanege! – Ferienspaß mit Tanz und Zirkus” that took place during the Saxonian winter hollidays February 2015. There the participanting children could during five day try out different aspects of circus and dance. At the end of the week a performance was created together, where the children guided the audience through the sporthall, on their way seeing different action stations that the children had invented in duos, smaller groups and everyone together. A video from the Tanzmanege Winter 2015 can be seen on the following link.

The core of the Tanzmanege projects is an aim to give the children ownership over their own creations, the possibility to be their own agent with a big believe and daring to take initiatives and try out new things, both alone and together with others.

The first project was received very positively by the participants and cooperation partners in the winter 2015 and showed that the children were truly creative, daring and cooperative. Then the project stayed within the walls of the sports hall and so the main idea in the continuation of the project is to continue with the same ideas and pedagogical methods but increase the inpact of the project from the sports hall to work in all of Gorbitz. With tools from Community Building methods and inspiration from City Mapping processes and the german term Subjektive Landkarten, we want to make the children show each other their area, their favorite places and the places where they do not go, we want them to see the area with new eyes, with new possibilities and through art we want to make them reshape the area, possibly making an audience rediscover their own area.

The main pedagogues of the project is Franziska Kusebauch and Pelle Tillö, supported by the pedagogical assistants Elena Cencetti and Oisín Haywood. The children will also throught the project meet several locally anchored artists, among others Jens Besser (web), Wagner Moreira (web) and Helena Fernandino.

The summer project will end in a performative City Walk, taking in all the discoveries and creations the children has done during the weeks and the inspiration from the visiting artists, the 28th and 29th of August. Then Tanzmanege will take a little break as school starts full time again in September but will be back in October, then going on tour from Gorbitz to the city of Dresden. More information of that will come!